Lesson 1: Don’t be clever. Keep It Simple and Serial (KISS).

Lesson 3: Race conditions can happen even if you think you followed all the right steps.

Lesson 4: Use the race detector!

It’s now been over a year since my last post! Family and work have occupied pretty much all of my time so spare time to learn Go was hard to come by.

However, I was able to squeeze in an implementation of a MQTT encoder/decoder library in July. The implementation is now outdated and is no longer maintained, but it allowed me to learn about the MQTT protocol and got me thinking about potentially implmenting a broker.

Message queues provide an asynchronous communications protocol, meaning that the sender and receiver of the message do not need to interact with the message queue at the same time. Messages placed onto the queue are stored until the recipient retrieves them. Message queues have implicit or explicit limits on the size of data that may be transmitted in a single message and the number of messages that may remain outstanding on the queue.

Tyler Treat of Brave New Geek also wrote a good series on message queues that went over several of the key MQ implementations. One specific post, Dissecting Message Queues, is especially interesting because it benchmarks some of the major message queue implmentations out there, both brokered and brokerless.

In that post, Tyler found that borkerless queues had the highest throughput, achieving millions of MPS sent and received. Brokered message queue performances ranged from 12,000 MPS (NSQ) to 195,000 MPS (Gnatsd). While the post showed that the Gnatsd latency to be around 300+ microseconds, in reality it’s probably more like the NSQ in terms of latency due to the sender sleeping whenever Gnatsd is 10+ messages behind. Regardless, hats off to Tyler. Great job!

I got interested in MQTT because “MQTT is a machine-to-machine (M2M)/“Internet of Things” connectivity protocol. It was designed as an extremely lightweight publish/subscribe messaging transport.”

According to the MQTT spec:

MQTT is a Client Server publish/subscribe messaging transport protocol. It is light weight, open, simple, and designed so as to be easy to implement. These characteristics make it ideal for use in many situations, including constrained environments such as for communication in Machine to Machine (M2M) and Internet of Things (IoT) contexts where a small code footprint is required and/or network bandwidth is at a premium.

The protocol runs over TCP/IP, or over other network protocols that provide ordered, lossless, bi-directional connections. Its features include:

Given the popularity, I decided to implement a MQTT broker in order to learn about message queues.

The above image showed a couple of the architecture approaches I attempted. In them, R is the receiver, which reads from net.Conn, P is the processor, which processes the messages and determines what to do or where to send them, and S is the sender, which sends any messages out to net.Conn. Each R, P, and S are their own goroutines.

I started the project wanting to be clever, and wanted to dynamically scale up/down a shared pool of processors as the number of messages increase/decrease. As I thought through it, it just got more and more complicated with the logic and coordination. At the end, before I even wrote much of the code, I scraped the idea.

Lesson 1: Don’t be clever. Keep It Simple and Serial (KISS).

The second architecture approach I took is much simpler and probably much more idiomatic Go.

This approach worked and I was able to write enough code to test it. However, the performance was hideoous. In a 1:1 (single publisher and single subscriber) configuration, it was doing about 22,000-25,000 MPS.

The buffered network IO is a good approach, however, there are two things I wished I had:

At this point I decided to try a new technique I learned while doing Go Learn Project #7 - Ring Buffer. The basic idea is that instead of using bufio to read and write to net.Conn, I will implement my own version of that.

The ring buffer will implement the interfaces ReadFrom(), WriteTo(), Read() and Write().

While this is not “zero-copy”, it seems good enough.

I started by implementing a lock-less ring buffer, and it worked quite well. But as mentioned in the ring buffer article, you really shouldn’t use it unless there’s plenty of CPU cores lying around. And also calling runtime.Gosched() thousands of times is really not healthy for the Go scheduler.

This is a single producer/single consumer ring buffer and is not designed for multiples of anything. The original thought was that since each connection has their own set of R, P and S, there shouldn’t really be a need for multiple writers or readers. It turns out I was wrong, at least on the writer front. We will explain this a bit later.

At the end, this turned out to be the winning combination. I was able to achieve 20X performance increase with this approach after some additional tweaking. Specifically, I tested several buffer block size (the amount of data to read from and write to net.Conn) including 1024, 2048, 4096 and 8192 bytes. The highest performing one is 8192 bytes.

I also experiemented with different buffer sizes, including 256KB, 512KB and 1024KB. 256KB turned out to be sufficient in that it’s the smallest buffer size that doesn’t reduce performance by alot, nor higher numbers will help inprove performance.

This the final architecture I ended up with and it’s working very well. The cost of each client connection are:

There’s very few memory copy operations going on, nor is there much memory allocation. So a good outcome overall. 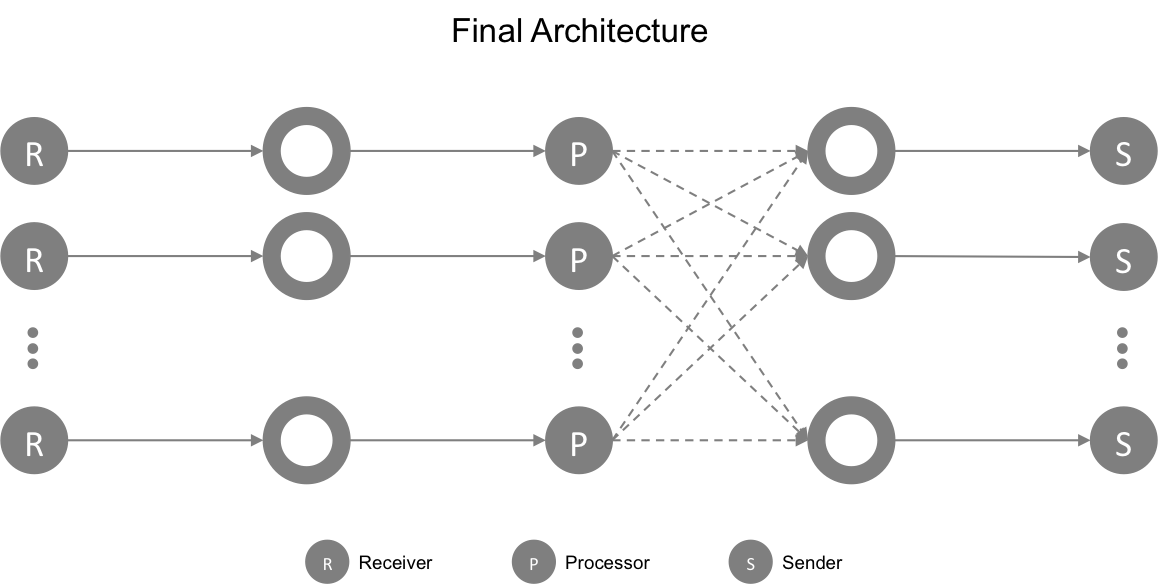 With the ring bufer implementation, I was able to achieve 400,000 MPS with a 1:1 configuration. This worked well until I started doing multiple publishers and subscribers. The first problem I ran into was the Processor hanging. go test -race also didn’t show anything that could help me.

After running tests over and over again, with more and more glog.Debugf() statements, I tracked the problem to the Processor. It was waiting for space in the ring buffer to write the outgoing messages. I know that’s not possible as I am blasting messages out to net.Conn as fast as I can, so there’s no way that write space is not available.

After running even more tests, and with even more glog.Debugf() statements, I finally determined the problem to be the way I was using sync.Cond. (I wish I saved the debug output..sigh) In the following code block, I was waiting for the consumer position (cpos) to pass the point in which there will be enough data for writing (wrap).

The steps are really quite simple:

Then in the Sender goroutine, I read data from the ring buffer, write to net.Conn, update the consumer position, and call pcond.Broadcast() to unblock the above pcond.Wait().

According to the Go doc,

It is allowed but not required for the caller to hold c.L during the call.

So what I have above should work perfectly fine. Except it doesn’t. What happens is that I ran into a situation where pcond.Broadcast() was called after the wrap > cpos check, but before pcond.Wait(). In these cases, the wrap > cpos returned true, which means we need to go wait. But before pcond.Wait() was called, the Sender goroutine has updated cpos, and called pcond.Broadcast(). So when pcond.Wait() is called, there’s nothing to wake it up, and thus it hangs forever.

On the Sender side, because there’s no more data to read, it is also just waiting for more data. So both the Sender and Processor are now hung.

After I finally figured out the root cause, I realized that, unlike what the go doc suggested, the caller should really hold c.L during the call to Broadcast(). So I modified the code to the following:

In any case, we are finally on our way to working with multiple clients.

Lesson 3: Race conditions can happen even if you think you followed all the right steps.

As I increase the number of publishers and subscribers, all the sudden I was getting errors about receiving RESERVED messages, and this happens intermittenly, and only when I blast enough messages. Sometimes I have to run the tests many times to catch this from happening.

It turns out that while I was thinking I only had 1 Publisher per client connection that’s writing to the outgoing buffer, I, in fact, had many. This happens when a client is sent a message to a topic that it subscribes to. In this case, the Processor of the publishing client calls the subscriber client’s Publish() method, and writes the message to the outgoing ring buffer. At the same time, other publishing clients can be publishing other messages to the subscriber client. When this happens, they could overwrite eachother’s message because the ring buffer is NOT designed for multiple writers.

go test -race should technically find this race condition (I think). But given that this condition only happens intermittenly and sometimes it only happens when there’s a large volume of messages, the race detector was taking too long and I was too impatient.

Regardless, after identifying the root cause, I added a Mutex to serialize the writes. At some point I may come back and rewrite it without the lock. But for now it’s good enough.

Lesson 4: Use the race detector!

These performance numbers are calculated as follows:

To start the server,

To run the single publisher and single subscriber test case:

To run the Fan-In test with 20 senders and 1 receiver:

To run the Fan-Out test with 1 sender and 20 receivers:

To run a full mesh test where every client is subscribed to the same topic, thus every message sent w/ the right topic will go to ALL of the other clients:

There’s a lot more to do with SurgeMQ. Given the limited time I have, I expect it will take me a while to get to full compliant with the MQTT spec. But that will be my focus, now that performance is out of the way, as I get time.