2013-11-17 Update #2: Tried another new trick. This time I updated the leading bit position function, when using the gccgo compiler, to use libgcc’s __clzdi2 routine. This had the same effect as the update #1 except it’s for when gccgo is used. Performance increase ranged from 0% to 20% for encoding only. Thanks dgryski on reddit and minux on the golang-nuts mailing list.

2013-11-16 Update #1: Tried a new trick, which is to use an assembly version of bitlen to calculate the leading bit position. See the section below on “Use Some Assembly”.

So, before you crucify me for benchmarking Go vs Java, let me just say that I am not trying to discredit Go. I like Go and will use it for more projects. I am simply trying to show the results as objectively as I can, and hope that the community can help me improve my skills as well as the performance of the libraries.

I don’t consider myself a Go expert. I’ve been using Go for a few months and have been documenting the projects as I go in this blog. I’ve learned a ton and have applied many of the things I learned in optimizing this project. However, I cannot claim that I have done everything possible, so the performance numbers “could” still be better.

I would like to ask for your help, if you can spare the time, to share some of your optimization tips and secrets. I would love to make this library even faster if possible.

The following chart shows how much (%) faster Java is compare to Go in decoding integers that are encoded using different codecs. It shows results from processing two different files. See below for more details. 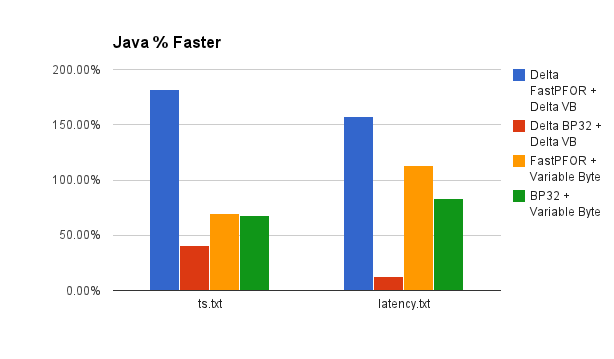 A month ago I wrote about my “Go Learn” project #6: Benchmarking Integer Compression in Go (github). In that project I ported 6 different codecs for encoding and decoding 32-bit integers. Since then, I have ported a couple more codecs, cleaned up the directories, and performed a ton of profiling and optimization to increase performance.

There are now a total of 8 codecs available:

In addition, the benchmark program under benchmark/ is provided to let users easily test different integer lists and codecs.

I cannot say this enough: benchmark, profile, optimize, rinse, repeat. Go has made testing, benchmarking, and profiling extremely simple. You owe it to yourself to optimize your code using these tools. Previously I have written about how I was able to improve the cityhash Go implementation performance by 3-16X by Go profiling.

To optimize the integer encoding library, I followed the same techniques to profile each codec, and try as much as I can to optimzie the hot spots.

Below are some of the optimizations I’ve tried. Some helped, some didn’t.

I learned this when Ian Taylor from Google (and others) helped me optimize one of the functions using range to loop through the slices instead of for i := 0; i < b; i++ {} loops. The for-range method can be 4-7 times faster than the other way. You can see the difference between BenchmarkOffset and BenchmarkRange here.

Side note: this set of benchmarks are courtesy of DisposaBoy and Athiwat in the #go-nuts IRC channel. Thanks for your help guys.

For some simple, known-size, loops, such as initializing a slice with the same initial non-zero value, unrolling the loop makes a big difference. The caveat is that gccgo -O3 does an amazing job of optimizing these simple range loops, so in that case unrolling the loop is actually slower.

As an example, the following function is unrolled as

It was originally written as

When unrolled, AND using the standard gc compiler, we saw performance increase by almost 45% if this function is called often. However, as we mentioned above, when using gccgo -O3, the for-range loop is 33% faster than the unrolled method.

For now, I am keeping the unrolled version of the function.

Given the success of unrolling the above simple loop, I thought I try unrolling even . more . loops to see if it helps.

There are several . small functions that gets called quite often in this encoding library. During profiling I see these functions being on top all the time.

I decided to try and inline these functions to see if the reduced function call overhead will help. In general I didn’t see much performance improvements using this technique. The most I saw was a 1% increase in performance. I contribute that to noise.

Disabling the bound checking for the Go compiler didn’t help as much as I hoped. For ts.txt, disabling bound checking increased performance by 10% for Delta BP32 encoding only. 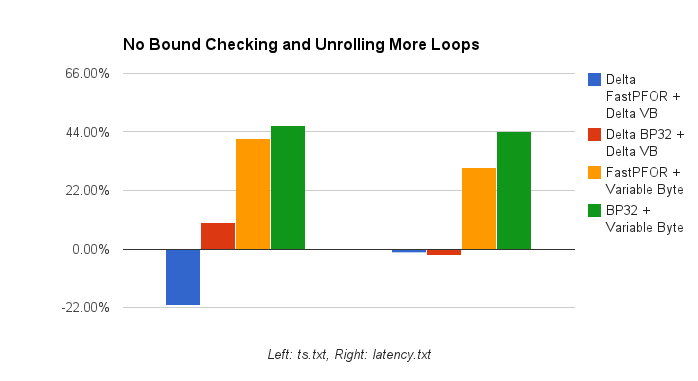 The question is, is it worth the removal of bound checking? For the raw results, I kept the numbers from the for-range loops.

When I was looking around for Go optimization techniques, I saw several posts on StackOverflow as well as the Go mailing list suggesting people try gccgo as the compiler if they wanted more performance. So I thought I give it a shot as well. After downloading gcc 4.8.2 and letting it compile overnight, I was finally able to test it out.

Compiling with gccgo without any optimization flags actually saw performance drop by 50-60%. The best performance result was achieved when I compiled using gccgo -O3. The comparison to Java uses the numbers from that binary.

As mentioned above, gccgo -O3 seems to do a pretty amazing job of optimizing simple range loops. I was able to achieve 33% performance increase using for-range with gccgo -O3 instead of unrolling the simple loop. The final result was within 6% of the Java version for Delta BP32 decoding.

The final trick I tried is to convert one of the often used functions to assembly language. This was suggested to me almost 6 weeks ago by Dave Andersen on the golang-nuts Google group. He suggested that I steal the bitLen function in the math/big/arith files. That’s exactly what I did.

The bitlen function returns the position of the most significant bit that’s set to 1. It is most often called by encoding methods to determine how many bits are required to store that integers. So natually one would expect only the encoding functions will be improved.

That’s exactly what happened. Using the new bitlen assembly function, I was able to improve encoding performance by anywhere from 3% to 40%, depending on the codec. The most significant improvement was saw when Delta FastPFOR encoding was applied on latency.txt. It consistently saw ~40% performance increase.

As such, the code has been updated to use the assembly version of the bitlen.

The system I used to run the benchmarks was graciously provided by Dr. Daniel Lemire. Here are the CPU and memory information at the time I ran the benchmarks. As you can see, we have plenty of memory to load the large integer arrays and should cause no swap. (I had this issue running these tests on my little MBA with 4GB of memory. :)

No disk IO is involved in this benchmark.

There are two files used in this benchmark:

For this benchmark, I used 4 different codecs:

Because both BP32 and FastPFOR work on 128 integer blocks, the 58 remaining integers from the test files are encoded using Delta VariableByte and Variable Byte codecs, respectively. This is achieved using a Composition (Java, Go) codec.

The Java and Go versions of the codecs are almost identical, logic-wise, aside from language differences. These codecs operate on arrays (or slices in Go) of integers. There are a lot of bitwise and shift operations, and lots of loops.

The raw results from running different Go compilers (and flags) and codes are in the Google spreadsheet at the bottom of the post.

So you can say that A is faster than B by X%.

I compiled 4 different versions of Go binary for this benchmark:

Using the gccgo compiler with no flags had the worst performance. In general we saw that benchmark.gc (standard Go version) is about 110%-130% faster than the gccgo version. 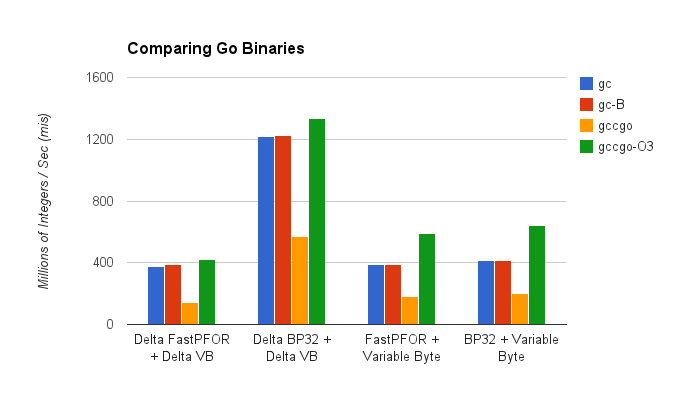 Above is a chart that shows the decoding performance of the ts.txt file for the different binaries and codecs.

For the comparison with Java, I am using the gccgo-O3 numbers.

Bits Per Integer (Lower is Better) 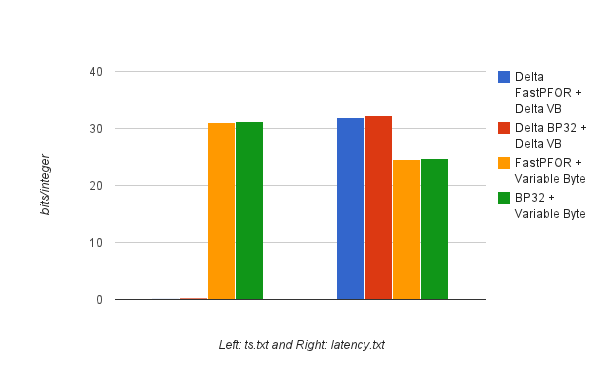 As you can tell, when the integers are sorted (ts.txt), the compression ratio is VERY good. Delta BP32 achieved 0.25 bits per 32-bit integer, and Delta FastPFOR is even better at 0.13 bits per integer. This is also because there are a lot of repeats in ts.txt.

Because the timestamps are rather large numbers, e.g., 1375228800, when the non-delta codecs are used, they did not achieve very good compression ratio. We achieved ~31 bits per 32-bit integer using standard FastPFOR and BP32 codecs.

I also tested the latency file against the zigzag delta codecs and achieved ~25 bits per 32-bit integer. So it’s not much better than the standard codecs. However, zigzag delta comes in extremely handy when the negative numbers are smaller.

For this section, we are comparing the decoding speed between the fastest Go version and Java. As you saw at the beginning of this post. Daniel Lemire’s Java version is anywhere from 12% to 180% faster than my Go version for decoding integers.

The following chart shows how much (%) faster Java is compare to Go in decoding integers that are encoded using different codecs. It shows results from processing two different files. See below for more details.

The following chart shows the decoding performance while processing ts.txt. 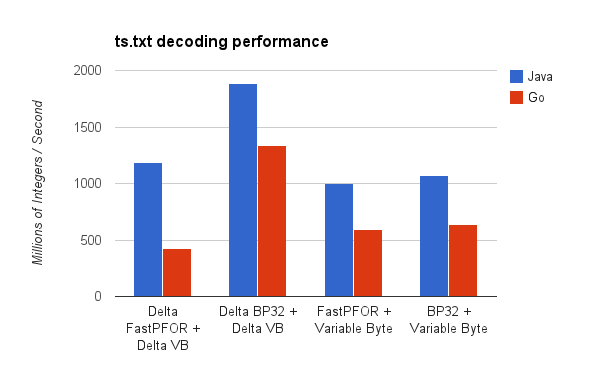 The following chart shows the decoding performance while processing latency.txt. 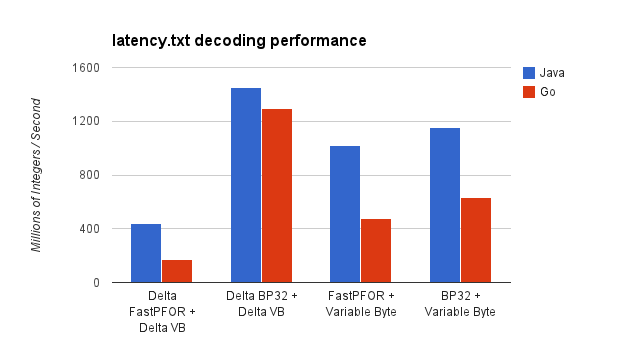 The raw results are in the following Google spreadsheet.