The data used for this post is available here. A word of warning, I only have complete data set for 2014 and 2015. For 2008-2013, I have what I consider to be representative samples. So please take the result set with a big bucket of salt.

After going through this analysis, the big question I wonder out loud is:

How can vendors differentiate from each other and stand above the crowd when everyone is using the same words to describe themselves?

The annual security conference, RSA 2015, is right around the corner. Close to 30,000 attendees will descend into San Francisco Moscone Center to attend 400+ sessions, listen to 600+ speakers and talk to close to 600 vendors and exhibitors.

For me, the most interesting aspect of RSA is walking the expo floor, and listening to how vendors describe their products. Intuitively, the vendor marketing messages should have a high degree of correlation to what customers care about, even if the messages trail the actual pain points slightly.

This post highlights some of the unsurprising findings from analyzing 8 years worth of RSA Conference exihibitor descriptions. 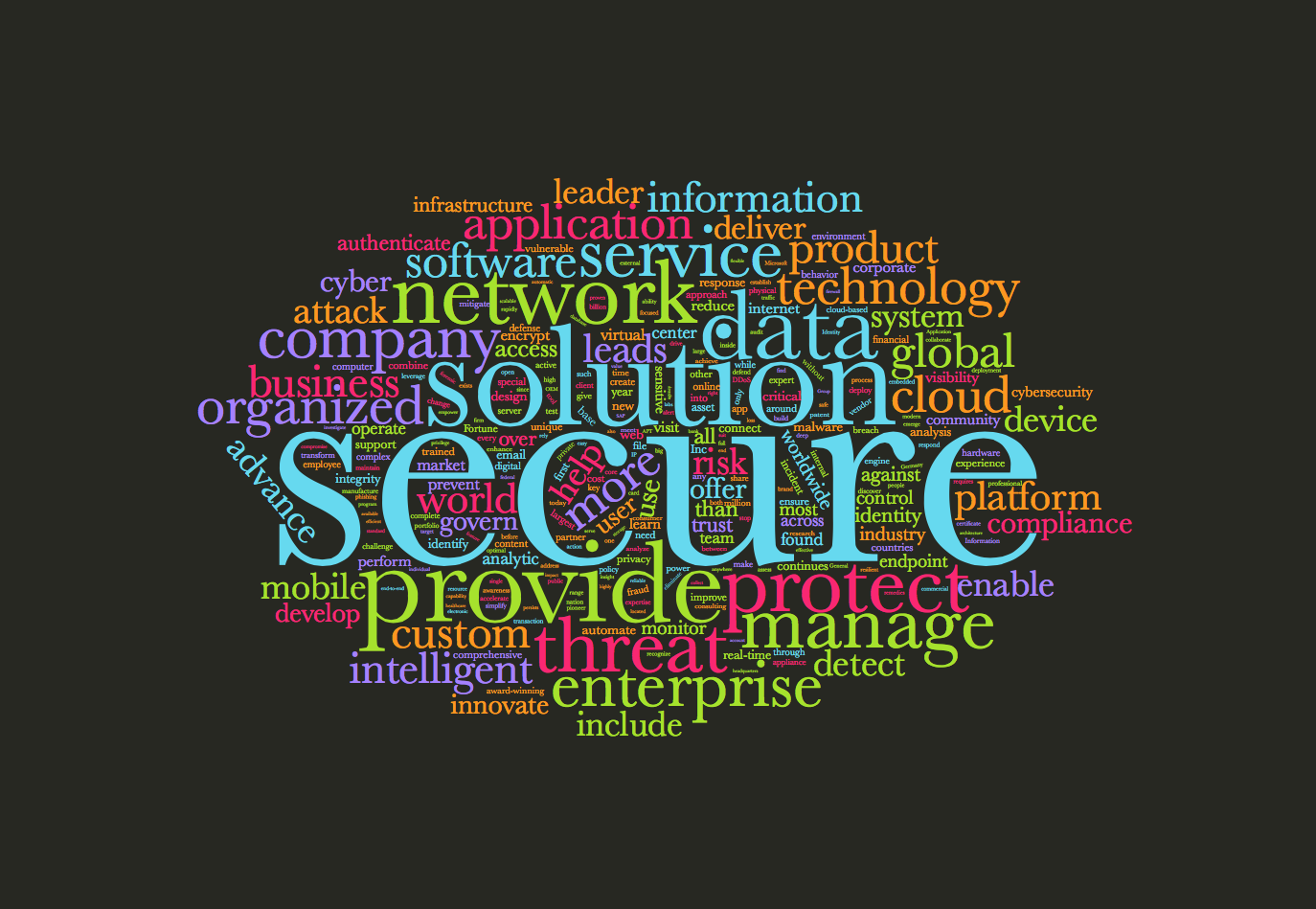 Compliance Down, Threats Up

While the macro trend has not changed dramatically for the exhibitor descriptions, there have been some micro trends. Here are a couple of examples.

First, the use of the word compliance has gone down over the years, while the word threat has gone up. After 2013, they changed places with each other.

This finding is probably not surprising. At the end of 2013, one of the biggest breaches, Target, happened. And over the next two years we’ve seen major breaches of Sony, Anthem, Home Depot, Premera and many others. Threats to both the corporate infrastructure as well as top executive jobs (just ask Target’s CEO Gregg Steinhafel, or Sony’s Co-Chairwoman Amy Pascal) are becoming real. So it seems natural for the marketers to start using the word threat to highlight their solutions.

Compliance was a big use case in security for many years, and many vendors have leveraged the need for compliance to build their company and revenue pipeline since the mid-2000s. However, use cases can only remain in fashion for so long before customers get sick of hearing about them, and vendors need new ways of selling their wares to customers. So it looks like compliance is finally out of fashion around 2011 and started declining in exhibitor descriptions. 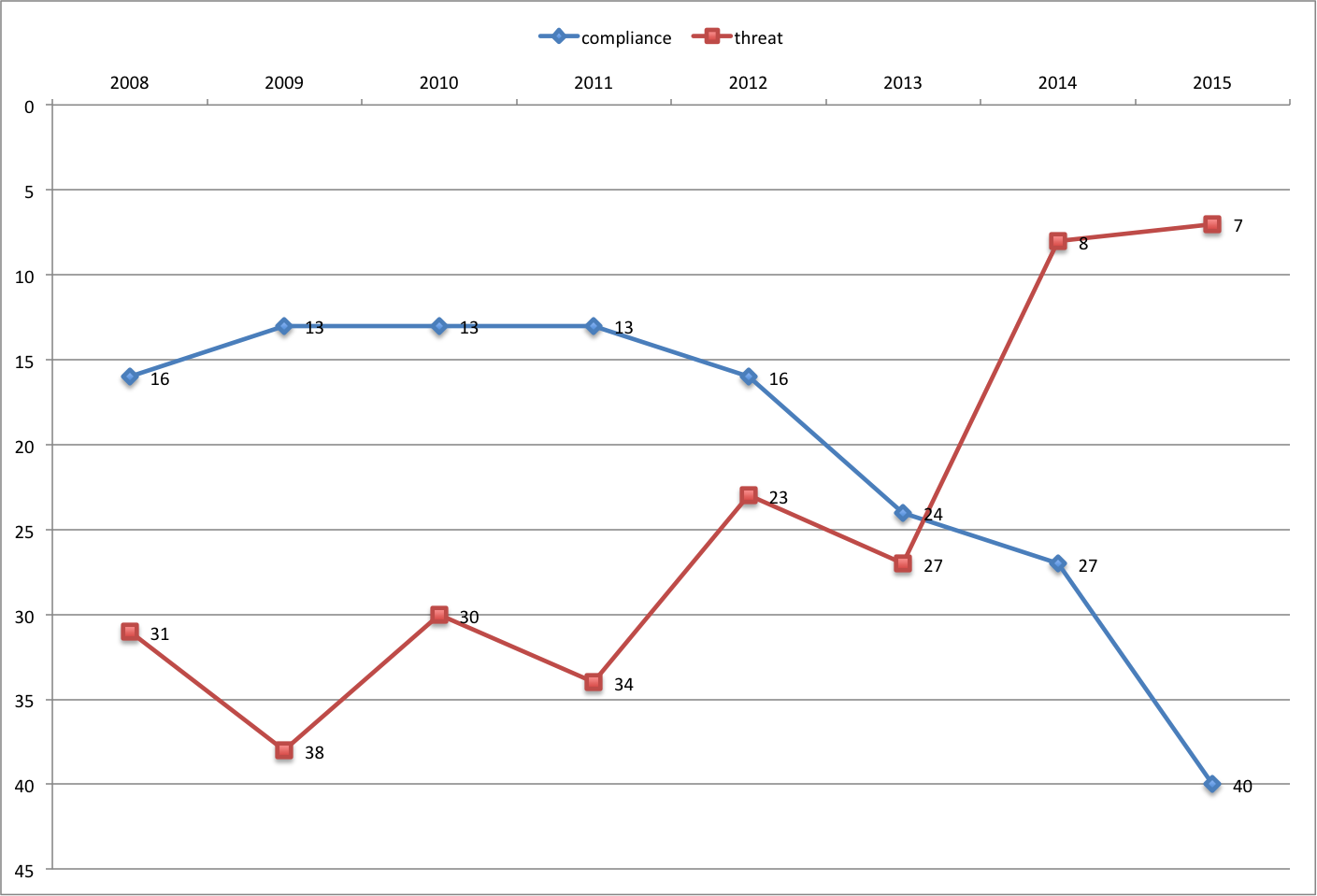 Mobile and Cloud Up

The words mobile and cloud has gained dramatically in rankings over past 8 years. In fact, it’s been consistently one of the top words used in the last 4. For anyone who hasn’t been hiding under a rock in the past few years, this is completely unsurprising.

The cloud war started to heat up back in 2009 when most major service providers have felt the Amazon Web Services threat and all wanted to build their own clouds. In fact, I joined VMware in 2009 to build out their emerging cloud infrastructure group to specifically help service providers build their cloud infrastructures. Eventually, in 2011, VMware decided to get into the game and I built the initial product and engineering team that developed what it’s now known as vCloud Air (still have no idea why this name is chosen).

As more and more workloads move to the cloud, requirements for protecting cloud workloads quickly appeared, and vendors natually started to position their products for the cloud. So the rise in cloud rankings matches what I’ve experiened.

About the same time (2010, 2011 or so), more and more corporations are providing their employees smartphones, and workers are becoming more and more mobile. The need for mobile security became a major requirement, and a whole slueth of mobile security startup came into the scene. So natually the mobile word rose in rankings. 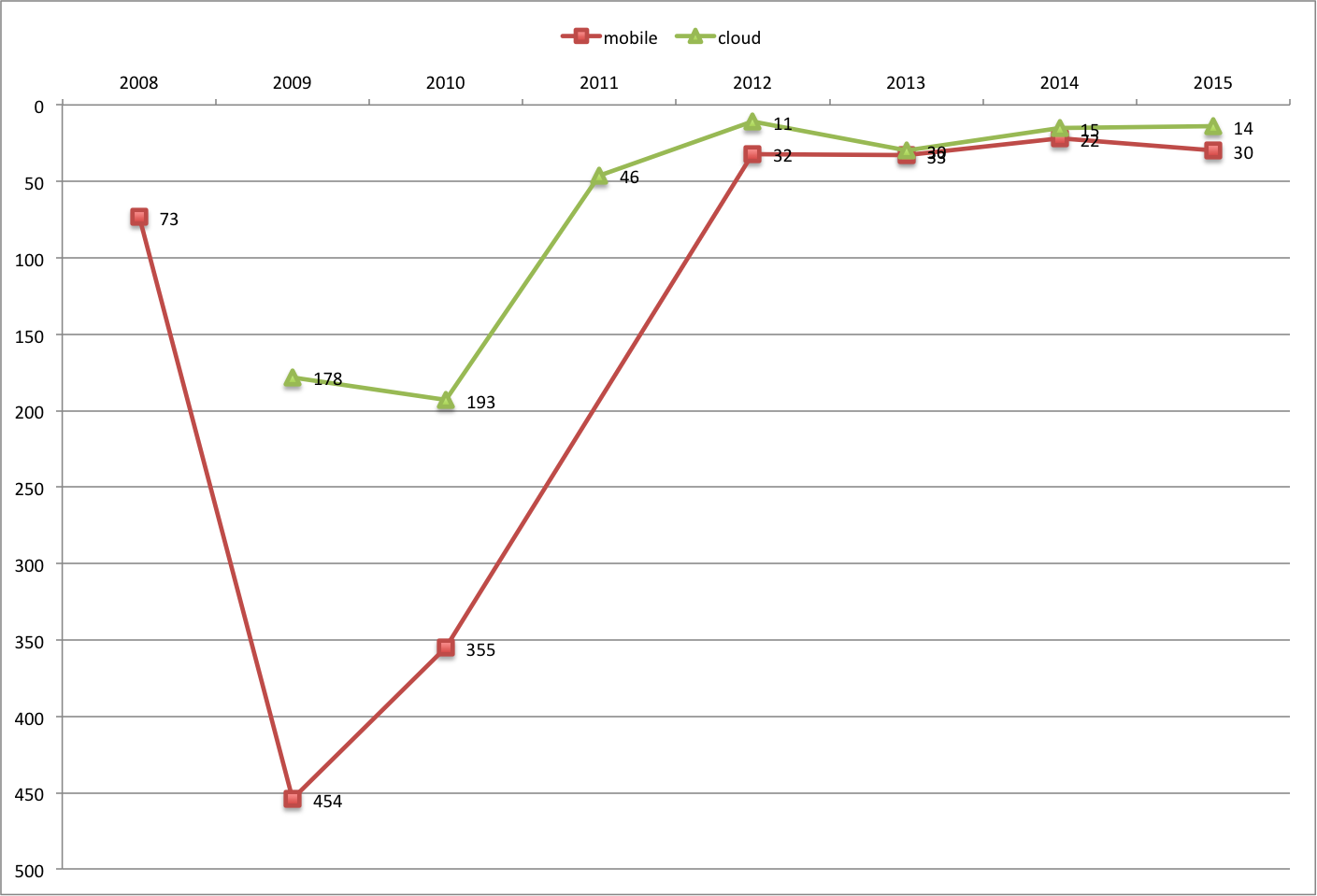 The words virtual and real-time dropped dramatically in rankings for a couple of years (2010, 2011) but have since regained all the lost ground and more. I have no precise reasons on why that’s the case but I have some theories. These theories are probably completely wrong, and if you have better explanations I would love to hear from you. 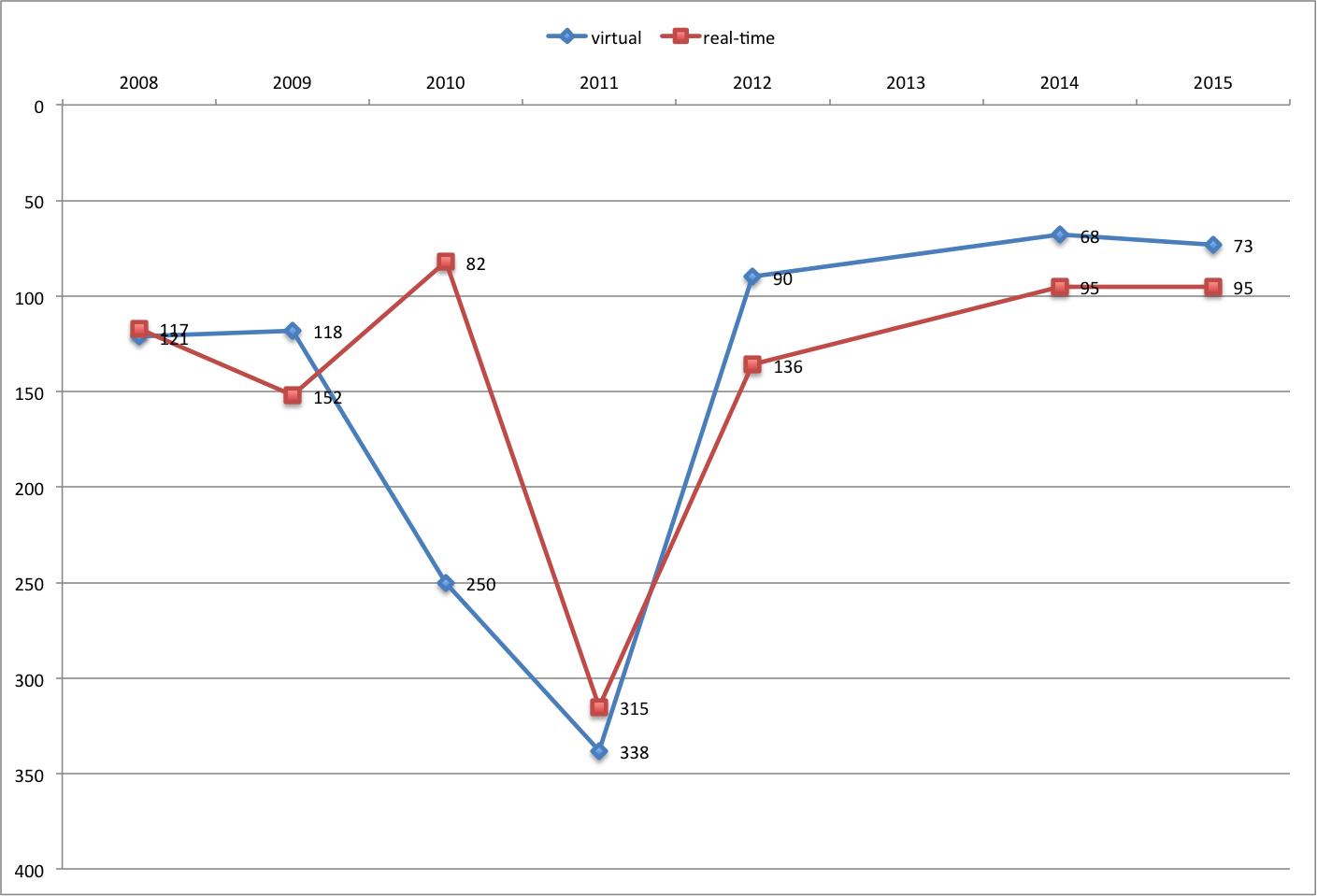 The word cyber gained huge popularity in the past 3 years, likely due to the U.S. government’s focus on cyber security. The word malware has been fairly consistently at the top 100 words since 2010. 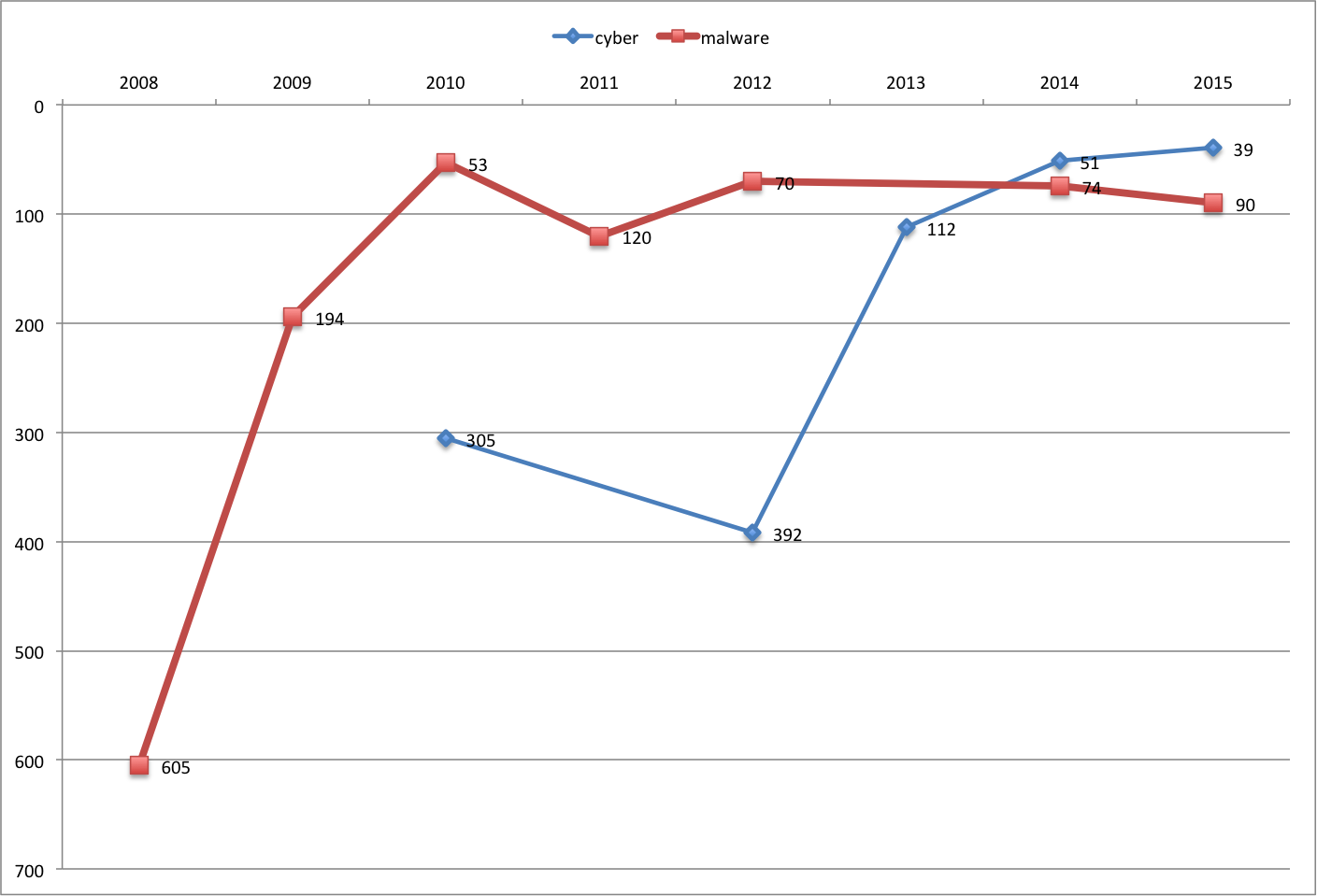 The words product and service switched places in 2013, likely due to the increase in number of security software-as-a-service plays.