The data used for this post is available here. A word of warning, I only have complete data set for 2014-2016. For 2008-2013, I have what I consider to be representative samples. So please take the result set with a big bucket of salt.

Continuing my analysis from last year, this post analyzes the exhibitors’ descriptions from the annual security conference, RSA 2016. Intuitively, the vendor marketing messages should have a high degree of correlation to what customers care about, even if the messages trail the actual pain points slightly.

The top words that vendors use to describe themselves haven’t changed much. The following table shows the top 10 words used in RSA conference exhibitor descriptions since 2008. You can find the complete word list here. 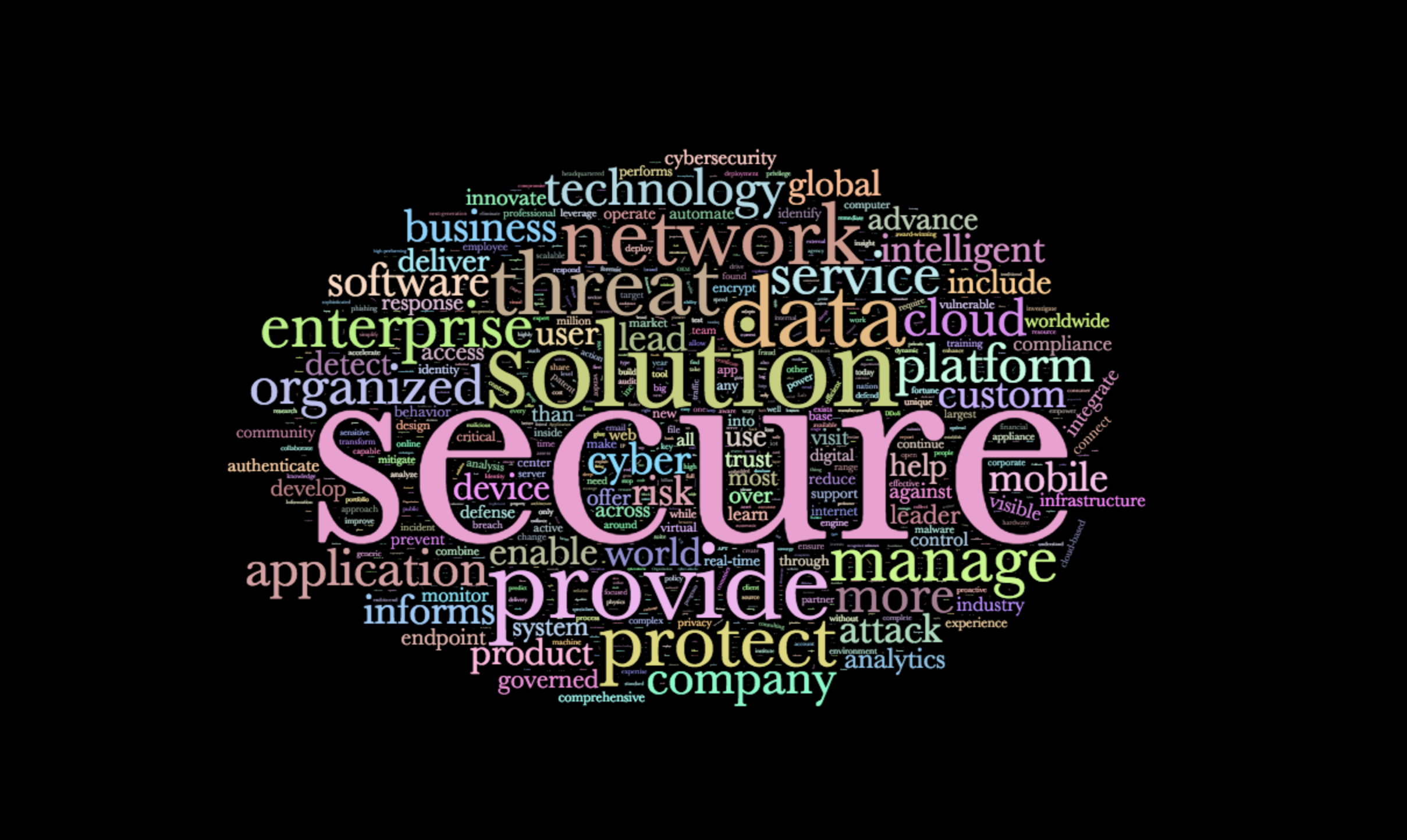 While the word network has mostly maintained its top 10 position (except 2013 when it fell to #11), the big gainer is the word endpoint, which improved drastically from #266 in 2012 to 2016’s #50. This may indicate that enterprises are much more accepting of endpoint technologies.

I also speculate that there might be a correlation between the increase in cloud and the increase in endpoint. As the perimeters get dissolved due to the move to cloud, it’s much more difficult to use network security technologies. So enterprises are looking at endpoint technologies to secure their critical assets. 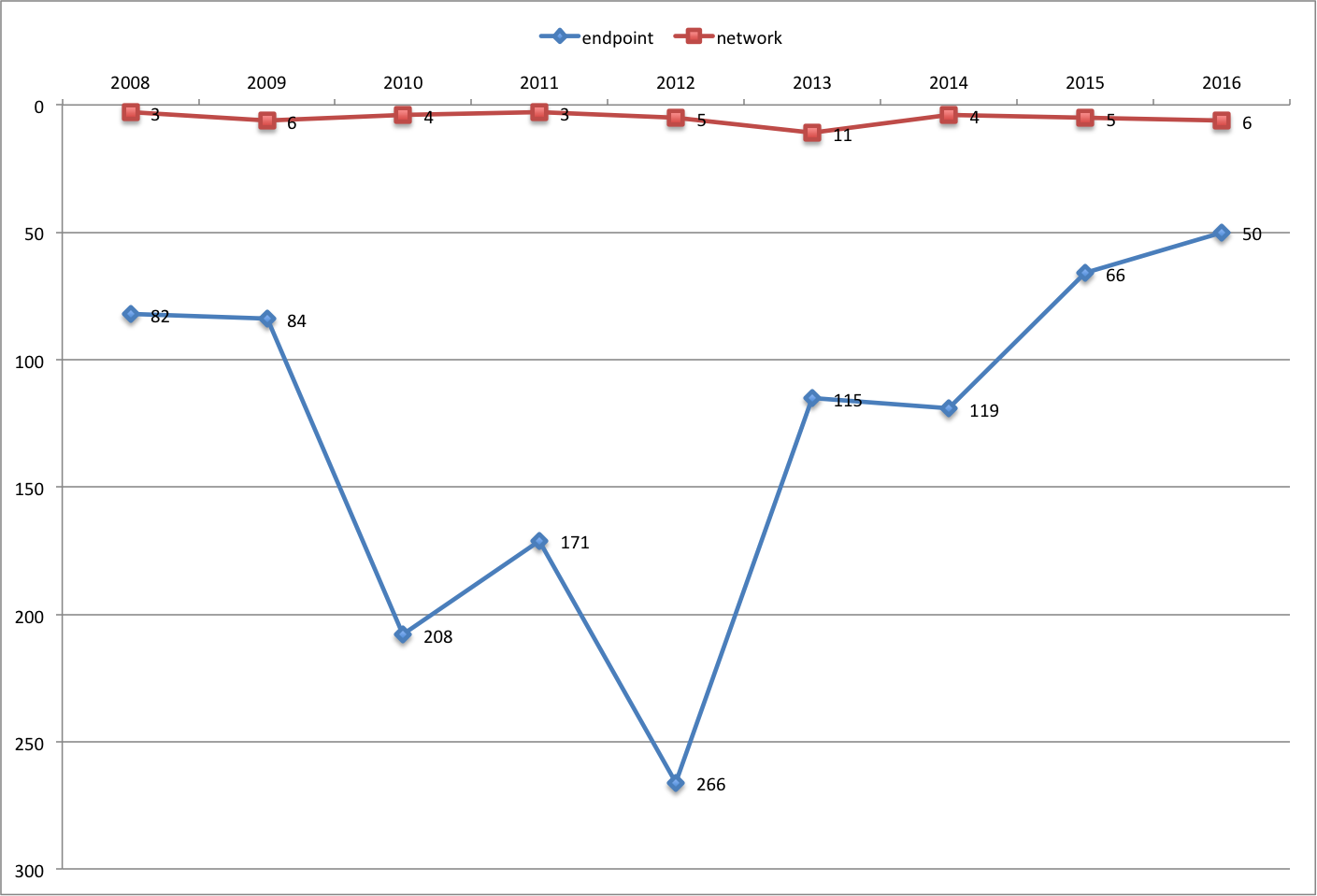 While the words mobile and cloud maintained their relative positioning in 2016, we can also see virtual continues its slight downward trend.

Interestingly, the word iot made a big jump, going from position #1073 in 2015 to #193 in 2016. This potentially indicates a strong interest in security for internet of things. In general, the IoT space has seen some major activities, including Cisco’s recent acquisition of Jasper. 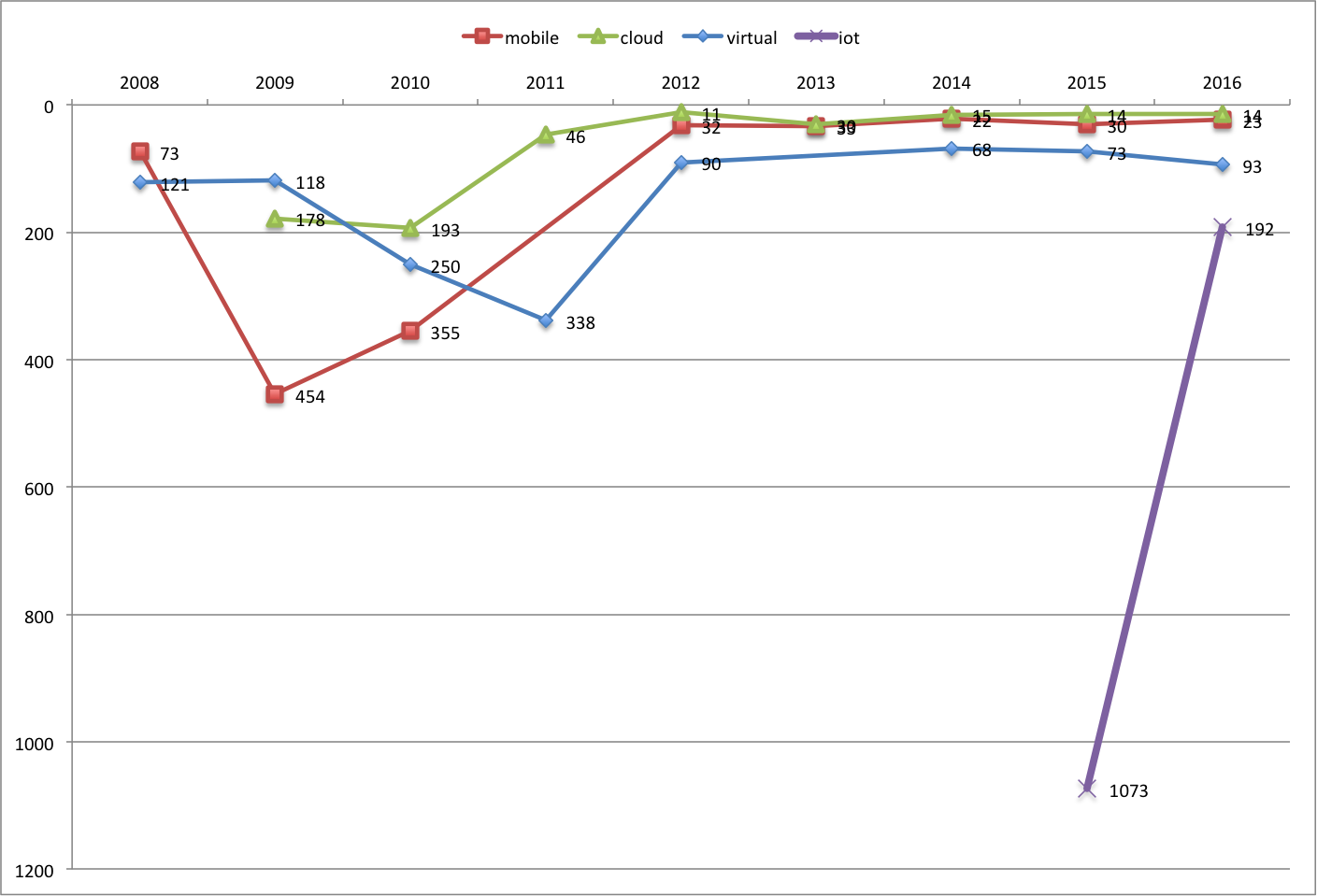 The word cyber continues to gain popularity in the past 4 years; however, the word malware has fell below the top 100, a position it maintained since 2010.

The word phishing made drastic gains since 2014, jumping from #807 to #193 in 2016. This may indicate that enterprises are seeing more attacks from phishing, and vendors are targeting that specific attack vector. 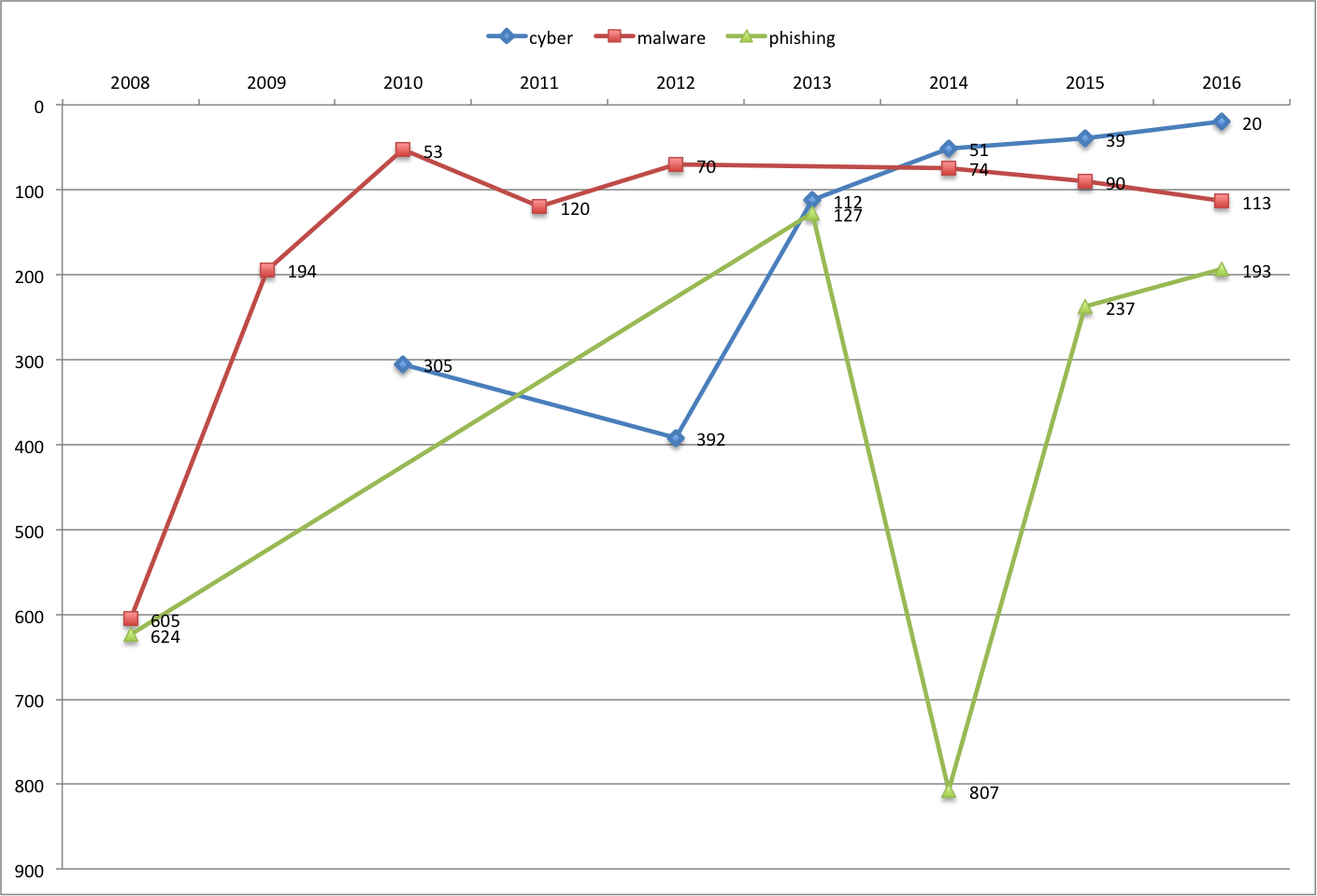 It’s all about Behavior! 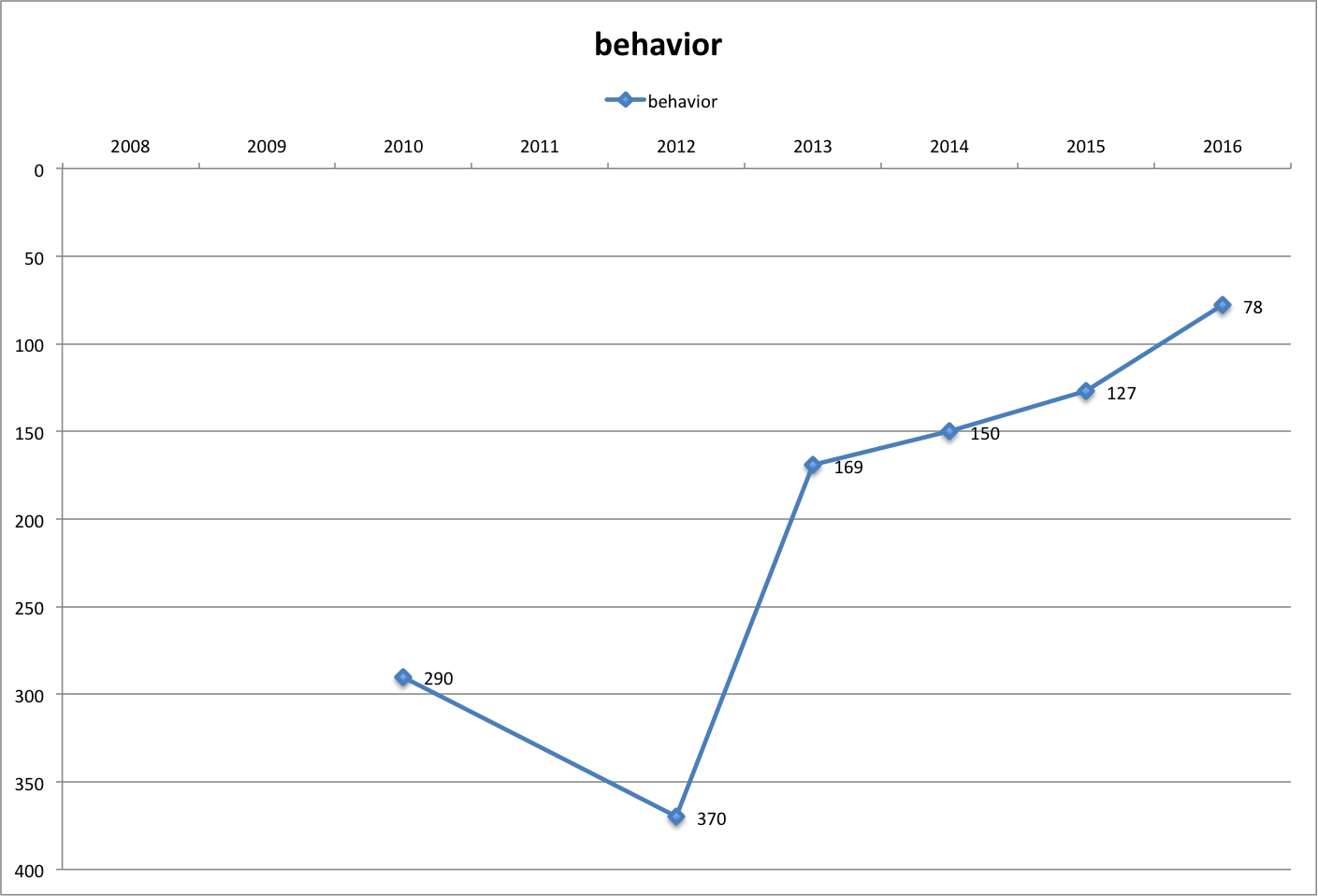